Go to Max's and see the others, and please play along with us because fresh blood is fun. It's not difficult. Just do a little word doodle. You'll be glad you did.

So Sveta brought home a guy tonight. This has, of course, pissed off Zoe, who refuses to admit that she's pissed off but who doesn't want to have anything to do with guys right now. She's more pissed off that I didn't just let Sveta and her friend have the bed and join Zoe on the couch. Ah well. She's down there asleep, they're in bed snuggled up and asleep, and I'm an insomniac so I'm writing this.

Lest you think that Sveta is trolling seedy bars for booty, this is a guy she knew in college. The craziest part is that they didn't fuck in college. But he was going to be in the area and asked if he could visit, and she was all about that. I think poor Sveta needs some loving from a good hard cock more frequently than she gets it, unfortunately, what with COVID and all.

Anyway, the two of them went out for dinner to catch up, whatever, and I didn't think anything was going to come of it until she texted me at work and said that basically he'd always had a thing for her but hadn't acted on it, and when he confessed that to her she was like, "Oh, Lexi doesn't mind, in fact she'd probably like to share you," which is not something guys dislike to hear, in my experience, so they were going to come home and fuck some and if I wanted to share I should come home too.

Work being what it was, I didn't get home until after they'd already had one horizontal mambo, and he was still building up his stamina for round two, but he was totally down with watching the two of us go at it, which we did quite nicely thank you, to the point where he basically knocked on my butt and asked politely if he could be let in. I deferred to Sveta, who needed cock more than I did, but she said he was welcome to start with me and finish with her. A lady likes to be asked.

That got him ready to go again (I admire a man who can handle multiple times) and it seemed like I was going to be a bit of the third wheel in this situation, so I retreated to console Zoe, who as I said is pissed but won't admit it. Sveta was making all kinds of noise upstairs and we tried hard to ignore it and watched TV. Then they quieted down and I went back upstairs and Sveta practically begged me to eat the cum out of her again, which I was happy to do. He was spent for the evening, but three times and for as long as they went is perfectly serviceable, and anyway she was pretty spent too. They were making out and cuddling next to me when we turned the lights out, and I don't know, maybe there were some signs of life on his part and he got it into her again, but I'm pretty sure sleep overtook any attempt.

So that's what's going on tonight Chez Lexi. I might go down in a bit and try to cheer Zoe up sexually. She'd appreciate that. She really isn't being bitchy about it, but it's pretty clear this isn't making her happy.

It's up. Do what you must. Go to Max's for others or to throw your who am I kidding you're not even reading this. 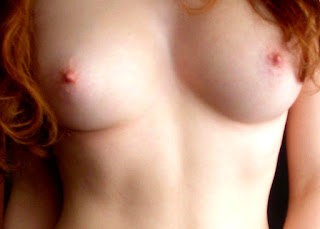 Okay, fine, now you can go to the sister-site and it'll be true. Then head to Max's for the others or, and this isn't a big ask, to write one of your own because I showed you my tits on spec.

You're not reading this either, are you? You're still looking at my fucking tits. My eyes are up here you know. I knew this was a mistake.

Bonus points if you visited the sister-blog before I posted this and you get the joke. The tits are definitely for you if so.

From the TMI Tuesday Blog:

You should never get involved in a kinky love triangle because you're probably fulfilling at least one of the three people's fantasies by doing so. They'll just keep stringing the whole thing along while you get hornier and hornier, and in the end you'll have made them cum over and over again while you get the shaft, metaphorically speaking. That said, when I showed up at my crush's apartment to find her in bed with another man, it stung, at least until she pointed out that two is better than one, and the triangle squared the circle nicely thank you.

2. When was the last time you snapped a nude pic of yourself? Where was the pic taken (e.g. bedroom, bathroom, etc.)?

Using sex as a road map is a good way to take a wrong turn at Albuquerque.

5. Do you tend to follow your desires and take risks?

Bonus: If you dig a deep hole through the center of the Earth starting from New Zealand, in what country will you emerge?

Aha! You never specified that the hole be a straight line! Therefore, anything I say will be correct, including telling you that you'll end up two feet to the left of where you started. As long as the hole goes through the center of the Earth, I can't be wrong! So I'll say you'll emerge thinking you should have taken that left turn at Albuquerque.

Does anyone even read these things? My latest is up on the sister-blog, and if you claim I never write poetry anymore, you're in for a horrible surprise. Head to Max's blog to see the others or to write your own, which you really should do because it's more fun with more people, like the sailor said to the virgin.

From the TMI Tuesday Blog:

If you could see two things change about your significant other what would they be?

She reads this blog so I can't be too honest, now can I? Okay, while I love her exactly as she is, I would love to be able to press a button and make her taller for a while, both because it would make certain sexual positions easier and because it would get her to understand the plight of a tall woman. But I wouldn't want it to be permanent because I'm a pervert and I like shorter girls.

Other than that, aside from a few things which aren't going to make it onto the blog, I wish her family were better. I mean, she's got my family now, but I wish hers were less dysfunctional. And that would probably only be solved by certain members of said family disappearing, so it's unlikely to happen.

What are two things you forgot to celebrate last year?

We didn't forget, but we had to keep both our birthdays fairly low-key because of COVID. Other than that, I always forget to celebrate St. David's Day every year, but where am I going to get a leek at short notice to pin to my lapel anyway.

Are you and your significant other both good at apologizing?

I don't know. She's better at it than I am, I think. It's something I struggle with.

What would you not admit on a first date?

Incest. I mean, I wouldn't admit that on a second date either.

I'd probably keep my medical history out of conversation as well, but I tend to over-share sometimes, so who knows? I probably wouldn't admit how promiscuous I am, but on the other hand I have sometimes and it's gone fine, so that's a maybe too. It depends on the date. Fortunately, I don't date anymore, really, so I don't have to worry about making polite small talk when all we both really want to do is get down to business. Just me? Okay, maybe other people are looking for human connections or whatever.

Kidding. I don't date because I'm bad at it. I've always been bad at it. I've been on innumerable dates and I've always been bad at them. Sometimes my partner was equally bad, and sometimes that meant that our badnesses canceled each other out and we had a splendid time. Sometimes not. Sometimes my partner has been charitable. Sometimes not. Dating sucks. We should give it up and just start fucking like animals in city parks for our amusement. Imagine if the first thing you did with someone was fuck them, hard, fast, anonymous, and then once that was over and the pressure was off you got to know them in the afterglow. Just me? Okay, maybe other people are looking for human connections or whatever.

Depends. If you're looking to be empowered by it I think it can be, particularly if your partner in said rebound activities is supportive. But if you're looking for love in all the wrong places, you're probably not going to find yourself empowered by desperation. I think the empowerment part is more about the support than the sex, so there's no requirement for sex if you've got a good friend with whom you can feel supported in a non-sexual way. As I like to have friendships with benefits, and as I have family with benefits as well, I have been comforted sexually on a number of occasions, but I think the sex was just an enjoyable way to be comforted, not a requirement.

Bonus: How do you mend a broken heart?

I don't know. That's a bit much to ask on a TMI quiz, I'd say. Maybe you can't. Maybe all you can do is get past the broken part and go on with your life with a part of your heart that will always be broken. They say that about grief: you never stop grieving, you just learn to deal with it. I have no reason to believe that broken hearts are any different from any other kind of grief, so maybe you don't heal. Maybe the scar is always there.

Either that or you clone yourself, kill your clone, steal its unbroken heart, and replace yours with it. Make sure you kill your clone in such a way that the internal organs are still usable.

Naughty Lexi
I have a sex life that some people seem to find entertaining to read about, so I write about it when I can. But I'm no stranger than anyone else, really. Just looking for love.