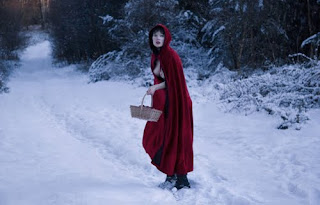 little girl lost in the snowy woods he howled to his pack but crafty crafty him did not say where. All the crunching and munching would be for him only him only him only. And he put on his best sad poor me face and crawled out to lure her.

She did not frighten. She did not know him for who he was. He was not used to human speech but he growled the question and she told him of grandmothers and so on. Little girl supper grandmother desert. How the tongue ached for the taste, but he was patient patient so very. She should not walk so far in the cold he told her as best he could. He could show her a shorter way he lied.

But mother had taught her well and she did not trust a varg even so scrawny seeming. So skipped she on fearless and he was hungering belly rumbling body aching. Patience is limited even among the oh so very crafty. And he leapt at her fangs glowing blood flowing claws showing.

And the magic in the red cloak struck him down dead. Some little girls are not lost or interested in losing. Remember this my children.

I've never really bought into the whole "all faerie tales are really about sex" thing. Sure, it's a lens through which you can look at them, but Little Red Riding Hood is not just about a girl losing her virginity, if it's really about that at all. You'd think I might be one to read sex into things, but actually I'm pretty happy with sex being where it belongs; I just happen to think that sex belongs in places with which other people might disagree. Basically, my thesis is that all the sexualization of faerie tales is an academic trick to give literature majors something to talk about. I didn't exactly lead a low-sex childhood, and my parents never once used faerie tales as illustrations of sex.

That said, I started to think about different ways one could tell faerie tales, and it hit me that maybe wolves tell a similar story, except the lesson is that sometimes seemingly-easy prey is actually really bad news. That's basically the story of Red Riding Hood; she's smarter than she looks, and in the end the wolf gets the chop. If he'd just worked with his pack instead, maybe either they could have brought her down or the wiser elders could have warned him away. He thinks he's so smart, but in the end, bam, dead. Sure, for the purposes of the length requirements I did make some cuts to the essential plot, but the meat is still "wolf sees girl, wolf tries to trick girl, girl is not tricked, wolf loses patience and acts alone, wolf winds up dead." That the girl and the grandmother occasionally wind up dead too would be of little consequence to the wolf.

I tried to work a bit of oral history and a different tone into it, just to think about how a wolf might sound telling a faerie tale. And because we tend to anthropomorphise animals in stories, I've had the wolves lupomorphise Red just a bit, since they need to be able to talk to her and humans are too stupid to understand wolf.

And now for the sex. Because, see, maybe I'm wrong and Red Riding Hood really is about virginity. In which case, this is a cautionary tale; some seeming virgins are not, and some virgins aren't eager to give it up to the first "wolf" who comes along. Or maybe it's all about the clitoris. Don't be rough with her, boys; she'll get you in the end. Tongues, not teeth.

See, I can say pretty much whatever I want.

Thanks to Max (that's a link to the challenge page, since there's no real formal collection of names this week) for hosting this week, and I hope PB is okay. Go over there and see who else might be playing, or throw your own hat in the ring, or just be a troll. Ooh, next week maybe I'll do The Three Billy Goats Gruff...

A fairy tale for little wolves. I love it!!!

The "wolf voice" was a nice take, the camera angle, low, feral, the soundtrack full of heartbeats and nature sounds and all the while the breathing, rich with the taste of meat, as he stalks and waits patiently.

But oh how the tides can turn.

@Max: I'm only sorry that such a wonderful picture was put to such mundane use. Ah well; maybe next week I'll have more time and energy.

@Advizor: I had no idea I'd even written a camera angle ;)

@TemptingSweets: Thanks hun, glad you enjoyed it.

Oh yes you did, it's the WolfCam and it mounts between the beasts shoulder blade and picks up the snarls, the growl, and the heartbeat as he approaches his "victim."

(And OK, i normally don't comment on the little made-up words below, but today's was "Fartury", really? I almost think that's a real word to describe my brother's bedroom while in high school)

I can think of all sorts of definitions for that word, but taste forbids ;)

Very well done. You need to look up Red Riding Hood and the Three Little Pigs by Roald Dahl. The wolf does not get the best end... as she pulled a pistol from her knickers...

I love that book. Well, basically I love anything by Roald Dahl, but that book is a very good one. I can't remember where my copy is now though, damn it. It's somewhere on the shelf.

Naughty Lexi
I have a sex life that some people seem to find entertaining to read about, so I write about it when I can. But I'm no stranger than anyone else, really. Just looking for love.